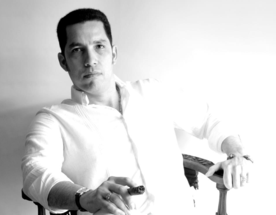 Orlando Rafael Quevedo was born on January 1st, 1970 in Holguin, Cuba. Orlando’s interest in the fine arts began at a very early age. In 1982, he was admitted to the highly respected Vocational School of Arts.  Subsequently, he attended the Professional School of Fine Arts in Holguin and completed his formal art education at the Superior Institute of Art in Havana, Cuba in 1993.  In that very same year, proud of his heritage & culture and determined to pursue his artistic career and his dreams, Orlando, arrives to the United States.

While residing in Philadelphia and along with his fine painting career; he worked as a professor of Art Appreciation at LaSalle University and helped beautify the city of Philadelphia by painting several large murals in the downtown area.

At the age of 35, Orlando was considered the nation's proponent of "Magical Realism". Magical Realism is an aesthetic style in which magical elements blend with the real world. His paintings portray these magical elements as realistic as possible, presented in a straightforward manner that places the "real" and the "fantastic" in the same subject matter.

A typical Orlando painting may include representations of works by renowned artist such as Chagall, Degas, Lautrec, Miro, Monet, Mucha, O'keefe, Picasso, Rembrandt, and Van Gogh.

Inspired by his favorite artists, Peter Paul Rubens, Velazquez and Rembrandt, he continues to pay homage to these "Masters" as he combines their techniques to create the light, drama, and movement that clearly define a continually evolving Baroque, surreal and magical style. When asked about why he loves paying homage to the masters in his paintings, he states that during his time at the Philadelphia Museum of Fine Art he felt that it was a natural progression to include some of the paintings he spent years observing. Orlando is a master of the light and shadow technique, the depiction of light and shadow is an important technique to represent illusory space in a painting. Without light, nothing can be seen but with shadow and shade objects and the Space surrounding them can be realistically defined.

Orlando explains that the hardest thing for a fine artist is to give the spectator an impression of a three-dimensional world on a flat canvas. This is when a lot of artists go wrong.

Currently, he operates his own fine art printing atelier where he controls the quality of his fine art prints and keeps a personal archive of all his editions for copyright purposes.

Orlando's works are exhibited in over thirty major art galleries and art auction homes around the United States and Europe. His work is regularly exhibited in Art Expo, New York, one of the largest art fairs to the trade and collectors.